Some investors think this year’s rally for tech stocks means there are no more deals to be had in that sector. The Nasdaq Composite index has gained almost 25% year to date and is up over 60% from its March low. That is surprising to many considering the economic downturn driven by the coronavirus is far from over.

But what those investors are missing is that many tech companies are relatively sheltered from the effects of the pandemic — or are even getting stronger as a result. Spotify (NYSE:SPOT), Peloton (NASDAQ:PTON), and Carvana (NYSE:CVNA) are good examples of these standout businesses that investors should consider buying.

Spotify, the world’s largest subscription audio-streaming business, has grown its monthly active users (MAUs) and Premium subscribers straight through COVID-19. After growing MAUs at approximately 30% annually in the last two years, it has sustained that pace through June of this year. There’s no evidence of any user slowdown as a result of COVID-19 and the current recession.

The same is true with its Premium subscribers, which were up 29% last year. Spotify grew this subscriber base 31% and 27% in the first and second quarters, respectively. Users around the world are listening to the service and bringing their consumption back to pre-pandemic levels. 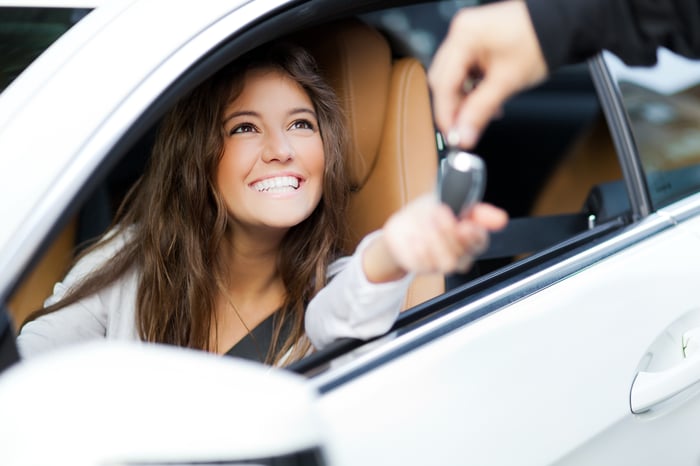 The big reason to buy Spotify shares today is the company’s multi-decade growth opportunity to become the default audio streaming platform for a large slice of the world’s population. It is well on its way with over 299 million MAUs, including 130 million Premium subscribers. No other streaming audio platform comes close to those numbers, and Spotify appears to be maintaining its industry lead, even against deep-pocketed competitors like Apple Music, the No. 2 paid streaming service.

As the company grows over the next several years, it has so many levers to pull to expand its profit margins. The company’s podcasting investments should yield a very high-margin advertising business. Its “two-sided marketplace” investments allow music labels and artists to promote their work via targeted ads on Spotify’s platform. And there’s the potential reduction of music royalties as the platform grows larger and even more important.

While Spotify shares are up about 60% this year so far, the stock still looks very cheap relative to its long-term opportunity.

Investors still undervalue Peloton’s business and long-term growth opportunity. That’s partly understandable: It’s hard to think of a fitness craze that didn’t eventually turn out to be a fad. Investors seem to have anchored onto that assumption without giving Peloton credit for robust track record and long-term prospects.

Peloton stands out from other fitness crazes, because its Connected Fitness subscribers didn’t necessarily join the company’s ecosystem for its bikes and treadmills, although those are quality products. Instead, Peloton’s popularity is driven by the interactive streaming content and the social community aspect. There’s no good precedent for that among prior fitness crazes — and no reason to assume it will fizzle out.

According to the company, the Peloton bike has a Net Promoter Score (NPS) in the 80 to 93 range. An NPS score is a measure of customer loyalty — anything above zero is considered good, above 50 excellent, and above 70 world class. Its customers seem quite pleased at this point in time.

In fact, shelter-in-place orders have been a boon for Peloton. With gyms closed and fewer people willing to sweat alongside strangers, the company saw average monthly workouts per subscriber more than double to 24.7 during the fiscal fourth quarter. Subscriber churn came in at just 0.52% during the same period, and Peloton boasted a 12-month retention rate of 92% — those who give its exercise equipment and services a try are clearly loving it.

This is key, because lower price points for entry into the Peloton ecosystem will make it accessible to more people, driving subscription growth, which is the crown jewel for the business.

Bullish investors believe Peloton can expand its fitness network to millions of subscribers over the next decade, winning over a growing share of the 183 million people who had gym memberships globally as of 2018. And the company’s ability to grow subscriber revenue without increasing its content production costs at the same pace suggests Peloton will enjoy strong profitability down the road.

Carvana is another business that is seeing supercharged demand from COVID-19. Consumers already dislike the traditional used-car buying experience. Now, consider how much more they want to avoid that visit to the dealership in the middle of a pandemic. As a result, the coronavirus is normalizing the idea of buying cars online. As CEO Ernie Garcia put it in his second quarter shareholder letter, it is causing “structural shifts in customer preferences leading to the strongest demand we have ever seen.”

Revenue growth rebounded to 40% year-over-year late in the second quarter, but that progress was held back by a lack of inventory. As the company is able to buy, recondition, and list cars on its website faster, its sales growth should only accelerate as it fulfills more of the record customer demand that it is seeing.

The more used-car shoppers try Carvana’s online experience, the more of them love it. Like Peloton, Carvana has an incredibly high NPS score of 82, according to one of management’s